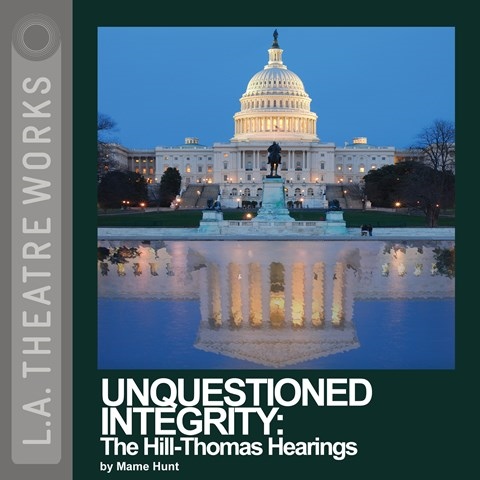 These portions of the Clarence Thomas Supreme Court confirmation hearings are dramatic, though not quite a drama; this production remains a reading of selected testimony, interspersed with bits of contemporary commentary. The acting is good. Edward Asner plays a generic senator who is sometimes on one side, sometimes the other, a dramatic device that mostly works. He excels at conveying, by turns, thoughtfulness and cluelessness; the latter gets what laughs there are. Paul Winfield overacts a tad but makes Thomas seem real—sharp, angry, wounded. Ella Joyce renders Anita Hill’s intelligence, vulnerability, and dismay. The piece is evenhanded; it’s possible to believe Thomas, even admire his eloquence and strength. But those who believe Hill will be chilled by what could only be Thomas’s pathological manipulativeness, cynicism, and dishonesty. W.M. © AudioFile 2011, Portland, Maine [Published: JUNE 2011]