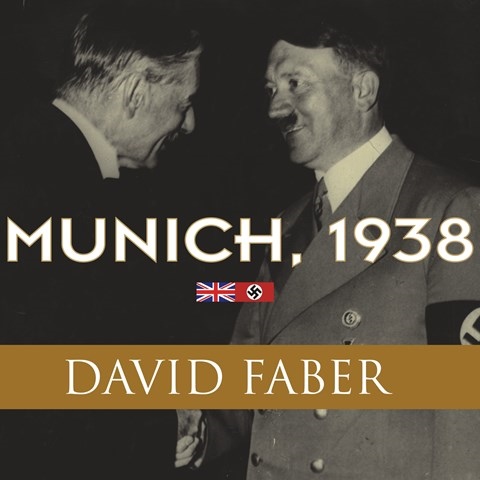 On September 29, 1938, Neville Chamberlain, Adolf Hitler, and Benito Mussolini signed the Munich Agreement, which transferred to Germany the Sudetenland, a part of Czechoslovakia that contained a large German-speaking population. The word “Munich” became synonymous with appeasement. Author David Faber writes an in-depth analysis of the historic pre-war negotiations, including the Fürher’s embarrassment at a field marshal marrying a prostitute and the army chief of staff having homosexual liaisons in a Berlin restroom. Narrator Arthur Morey's soft voice melts into the background as he reads, allowing the people and events to take prominence. The abundance of European names and places flows with ease from his lips as he makes the intimate portraits of the famous principals as real as meeting them. J.A.H. Winner of AudioFile Earphones Award © AudioFile 2010, Portland, Maine [Published: MAY 2010]