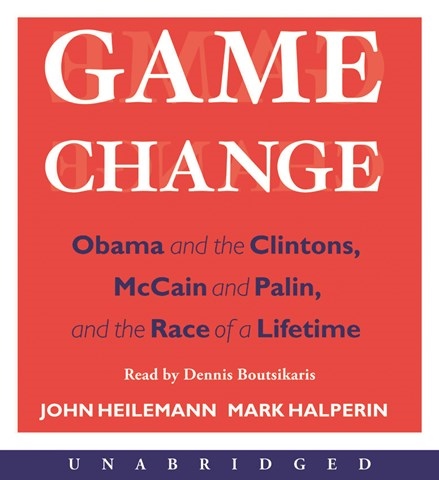 GAME CHANGE Obama and the Clintons, McCain and Palin, and the Race of a Lifetime

In a sea of direct quotes, supported by the authors' comments and opinions, GAME CHANGE reprises the run-up to the 2008 presidential election. The hundreds of intimate conversations among candidates and aides—some of them during phone calls—must have been recorded, because no mere human could remember such details. The incessant leaps from camp to camp and state to state challenge listeners' abilities to stay oriented. Narrator Dennis Boutsikaris delivers right from the page—a technique many readers prefer—without any characterizations of the well-known sources. His reading of the frequent "F" word aloud magnifies its potential to offend. One McCain tirade has the word 15 times. J.A.H. 2011 Audies Finalist © AudioFile 2010, Portland, Maine [Published: FEBRUARY 2010]