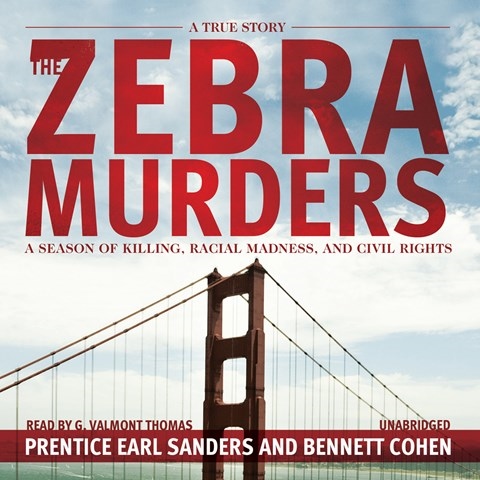 THE ZEBRA MURDERS A Season of Killing, Racial Madness, and Civil Rights

G. Valmont Thomas narrates this account of a series of racially motivated murders in San Francisco between 1973 and 1974. Thomas offers an intelligent reading and is completely convincing as Sanders, the first African-American chief of police in the SFPD. This was the time of the Zodiac killer, the Black Panthers, the Weathermen, and the Symbionese Liberation Army—who infamously kidnapped Patty Hearst. It was also the time when 15 white people were randomly murdered by black assailants in the city. Thomas’s performance is faithful to Sanders and Cohen’s account, which alleges rampant racism in the SFPD and outlines the ongoing struggle to give African-American policemen equal rights while recounting the disturbing killings that pushed San Francisco to the edge of a race war. S.J.H. © AudioFile 2010, Portland, Maine [Published: NOVEMBER 2010]