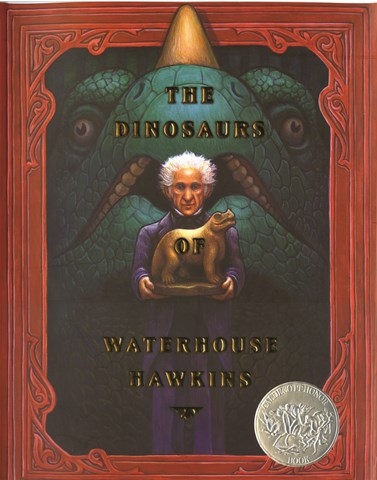 THE DINOSAURS OF WATERHOUSE HAWKINS

A thirst for knowledge, a passion for creativity, and a desire to share with the world are the hallmarks of Waterhouse Hawkins, a nineteenth-century British natural history artist who specialized in dinosaurs. From his earliest models of dinosaurs, derived from the latest scientific discoveries of the time, to his later years of painting and making “iguanodons,” Waterhouse worked tirelessly to share his creatures with a wide audience, ranging from fellow scientists to strollers in the Crystal Palace Gardens in London. Jonathan Pryce narrates with vigor. He takes Brian Selznick’s illustration cues to heart as he portrays characters with great flair. As listeners pore over Selznick’s rich paintings, Pryce breathes life into the dinosaurs and the extraordinary characters—including the pompous and conniving scientist William “Boss” Tweed. Interviews with the author and illustrator sharing their exploration of Hawkins and his dinosaurs conclude the production. A.R. © AudioFile 2010, Portland, Maine [Published: OCTOBER 2010]