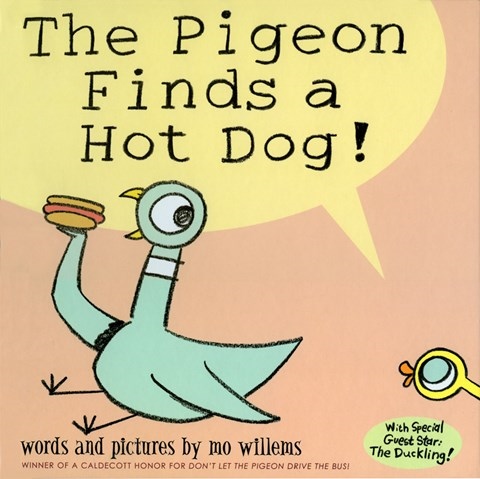 THE PIGEON FINDS A HOT DOG!

Mo Willems appears once again as an over-the-top pigeon. This time he’s apoplectic with glee over discovering AN ENTIRE HOT DOG! Just as he’s about to dig in, he’s interrupted by a duckling, played expertly by Willems’s daughter, Trixie. The duckling innocently asks what a hot dog tastes like. The resulting exchange between the dramatic pigeon and the cucumber-cool duckling is hilarious. Trixie’s voice—childlike yet sophisticated—provides a restrained and charming foil for Willems’s larger-than-life, all caps-and-exclamation-points pigeon. As the pigeon moves from praising the glory of hot dogs to possessive gluttony to a resolution of his greedy anxiety, a fun musical score accents the drama and serves as a delightful backdrop to the fun. J.C.G. © AudioFile 2010, Portland, Maine [Published: NOVEMBER 2010]