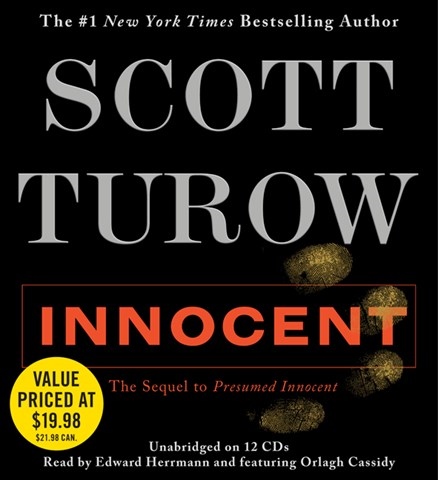 Scott Turow's latest legal thriller is a sequel to his 1987 blockbuster, PRESUMED INNOCENT, in which DA Rusty Sabich was accused of murdering his lover, another female prosecutor. Twenty-three years later, Rusty is now an appellate judge; despite his best intentions, he’s involved in another affair and soon finds himself accused of murdering his wife, whom he finds dead in their bed. There are so many twists and turns in this one you'll never guess what really happened. The story is expertly narrated from the main characters' points of view by Edward Herrmann in the male parts and Orlagh Cassidy as the female characters (though Cassidy gets no written billing). Herrmann masterfully portrays the stoic Savich, his confused adult son, and the relentless defense lawyer Sandy Stern, who is weakened by cancer. Cassidy is superb as Anna, Savich's new lover, and Marta, Stern's daughter, who bolsters her father's defense team. The frequent switches in point of view have the potential to be confusing, but the dual narrators make them work. Although this is clearly a sequel, one needn't have read PRESUMED INNOCENT to enjoy it. Further, the quality of the writing is high, and the narration sterling. A.L.H. 2011 Audies Finalist © AudioFile 2010, Portland, Maine [Published: JUNE 2010]