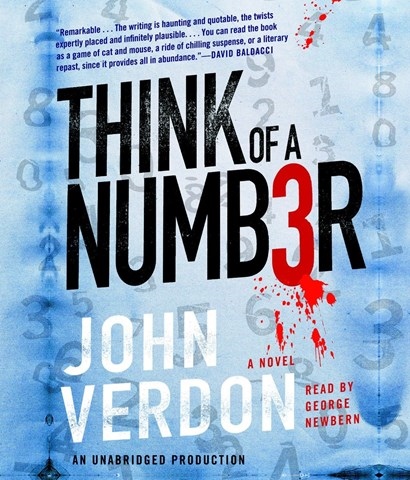 THINK OF A NUMBER

Legendary NYPD homicide detective Dave Gurney, newly retired, is asked by an old college friend to find out who has been sending him taunting letters filled with threats and innuendos. Gurney’s clever, thoughtful wife, Madeline, and the couple’s unraveling marriage also figure prominently in the suspense. George Newbern helps create Verdon’s compelling, well-drawn characters, giving them unique, carefully crafted voices. Newbern’s portrayal of Gurney is characterized by a wry tone. As listeners are immersed in the drama of Gurney’s past, the seemingly clairvoyant killer develops his knack for disappearing. S.C.A. Winner of AudioFile Earphones Award © AudioFile 2010, Portland, Maine [Published: SEPTEMBER 2010]