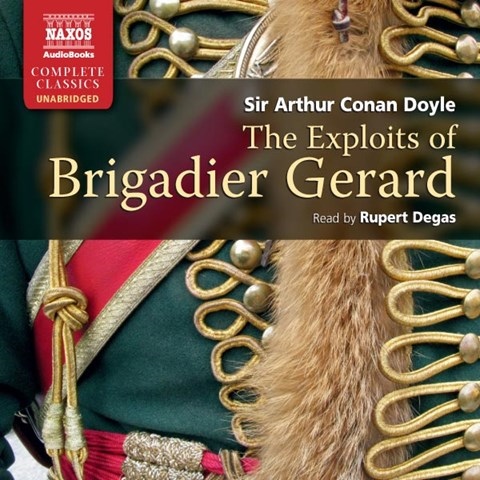 THE EXPLOITS OF BRIGADIER GERARD

Conan Doyle originally published the humorous stories in this 1896 anthology in “Strand” magazine, where Sherlock Holmes had long comfortably dwelled. These are the first-person war stories of Etienne Gerard, a dandyish, opinionated, conceited, randy, dull-witted, and fearless officer in Napoleon’s army. In the canon of satirical military figures Gerard stands (at attention, of course) squarely between Baron Munchausen and the Good Soldier Schweik. Militarism, English boorishness, and French arrogance get the worst from Conan Doyle here. His humor seems to escape narrator Rupert Degas, who exhibits plenty of vigor but little comic finesse. He plays Gerard with a French accent and fully voices the other characters, playing the various accents convincingly while skimping on characterization. A handsome and informative pamphlet accompanies the CD edition. Y.R. © AudioFile 2010, Portland, Maine [Published: AUGUST 2010]