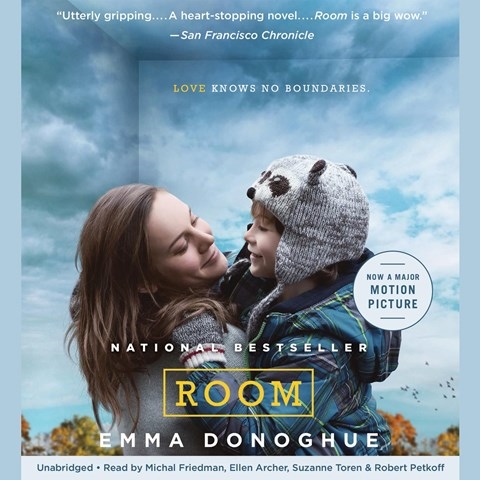 Meet Jack. He's 5 today, and he celebrates with Ma in Room, where he has lived his entire life. This harrowing tale of long-term captivity and its effects is narrated flawlessly by Michal Friedman and Ellen Archer, who voice Jack and Ma with depth and feeling. The two additional narrators, Robert Petkoff and Suzanne Toren, deliver perfectly nuanced supporting characters. Told from Jack's perspective, the story recounts his and Ma's days in Room, where they're held hostage by Old Nick, and the planning of their Great Escape. Once it happens, however, assimilation into life outside proves to be less seamless than Ma anticipated. Friedman's Jack is winsome, lovable, and thoroughly credible. Expressing a 5-year-old's emotions amid subject matter like this is an enormous undertaking, and Friedman delivers. K.M.G. Winner of AudioFile Earphones Award, 2011 Audies Finalist © AudioFile 2010, Portland, Maine [Published: NOVEMBER 2010]