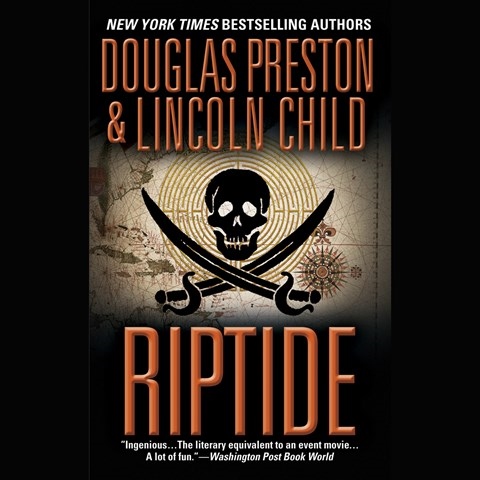 RIPTIDE is a rip-roaring thriller involving a pirate treasure horde, a Maine island redoubt booby-trapped by a seventeenth-century ecclesiastical architect and spy, and the usual assortment of fanatics driven mad by greed as their goal gets nearer, not to mention the obligatory hurricane winds rising to ratchet up the jeopardy. Surprisingly, the usually excellent Scott Brick has made the bizarre choice to deliver most sentences with the same singsong rhythm you would give to the lines “Merry Christmas to all, and to all, a good night.” Really. Without regard to pacing or sense, not caring if the words are “was ankle-deep in blood” or “opened a can of soup.” TREASURE ISLAND on steroids should have produced foolproof audio thrills, but, alas, not in this production. B.G. © AudioFile 2012, Portland, Maine [Published: AUGUST 2012]