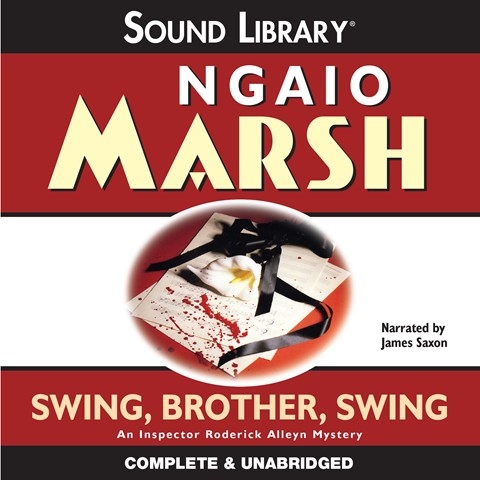 James Saxon gives an over-the-top performance in this reissued Inspector Alleyn production, written in 1949. Yes, it’s dated, but it’s such a caricature of the British upper class that listeners will be laughing and wondering who done it at the same time. All the characters get their individual voices—pompous Lord Baggott, whose latest desire is to play in a jazz band; his long-suffering wife; his stepdaughter, Felicite; the smarmy musician she falls for; and the club owner, Breezy. When the musician is killed onstage, it falls to Inspector Alleyn, who is conveniently in the audience, to sort things out. He is the voice of reason amid all the eccentricity. Saxon’s lush delivery never flags through a lengthy investigation and a surprising conclusion. J.B.G. Winner of AudioFile Earphones Award © AudioFile 2010, Portland, Maine [Published: DECEMBER 2010]