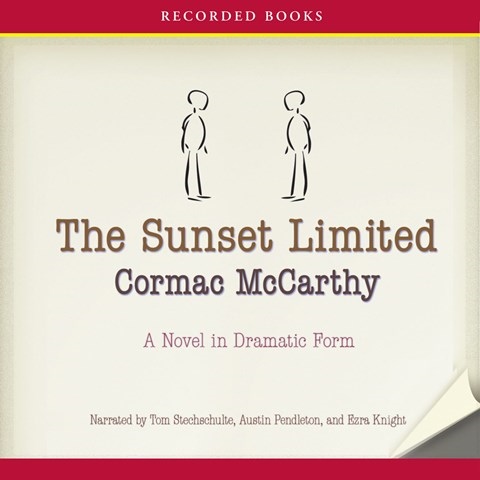 A college professor attempting “suicide by subway” is rescued by a black man from the projects, who takes him home to discuss the value of life. With short narrative passages by Tom Stechschulte, the "novel in dramatic form" is performed by Austin Pendleton and Ezra Knight, as the professor and his guardian angel. Each engages fully in his character to the point that the listener feels empathy for the professor as he endures his rescuer’s relentless badgering and sadness for the angel as he struggles to find any way to save the professor’s soul. Stechschulte delivers the narrative passages with sadness, along with an almost clinical detachment. The gripping story and performance leave the listener wanting more. R.L.L. Winner of AudioFile Earphones Award, 2011 Audies Finalist © AudioFile 2010, Portland, Maine [Published: OCTOBER 2010]