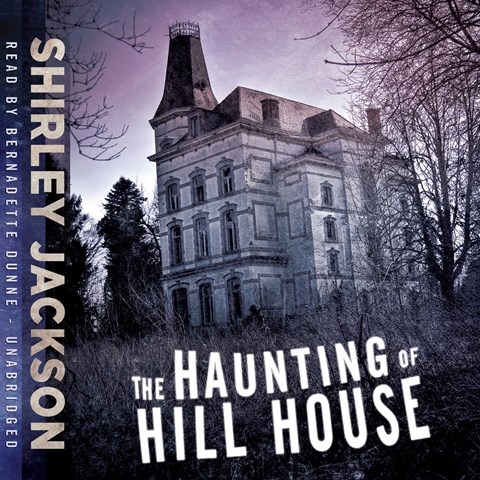 THE HAUNTING OF HILL HOUSE

Bernadette Dunne's performance of Jackson’s novel is so eerily superb that she breathes new life into the 1959 ghost story—best remembered by many as the 1963 film starring Julie Harris. An occult scholar gathers three others with experience of psychic phenomena to investigate whether Hill House is truly haunted—with chilling results. Dunne’s creepy husky voice is, at the same time, quaint and quavering as the timid Eleanor. As the other, more stable, characters Dunne uses firmer, more confident, inflections. But it is Eleanor's story, and we hear her whimsical tangents and flights of fancy in Dunne’s voice. Soon we’re swept away by Eleanor’s rising hysteria, delivered breathlessly by Dunne, as Hill House’s forces make their presence known. Dunne's voicings of Eleanor's inner monologues are fully credible as she becomes unnerved by emotional torment, mounting despair, and hatred—all invoked by the ghastly gothic structure at the top of the hill. A.W. Winner of AudioFile Earphones Award © AudioFile 2011, Portland, Maine [Published: FEBRUARY 2011]