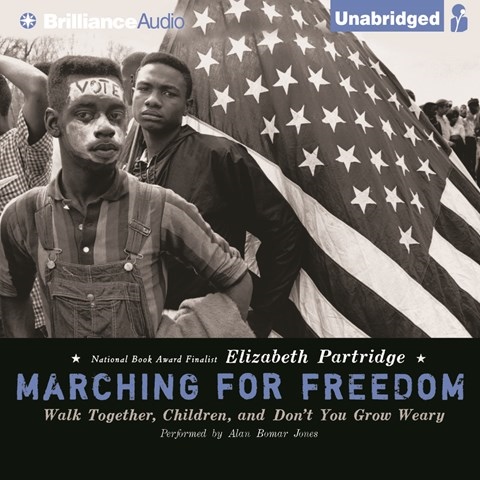 MARCHING FOR FREEDOM Walk Together Children and Don't You Grow Weary

This award-winning, captivating history makes a wonderful transition to audio because of Alan Bomar Jones’s performance. Jones delivers the historical background and the quotes of well-known leaders in factual tones and adds poignancy to the stories of interviewees who were young activists during Alabama’s Civil Rights struggles in 1965. Jones’s varied tones portray the immense emotional swings of events—from the pride of the Selma march to the terror of the violence meted out by state troopers on Bloody Sunday. A particular strength of the audio comes in Jones’s rich renditions of the music that united and gave strength to the frightened youth. Also included are a note read by the author and the powerful photographs from the book. S.W. © AudioFile 2011, Portland, Maine [Published: APRIL 2011]