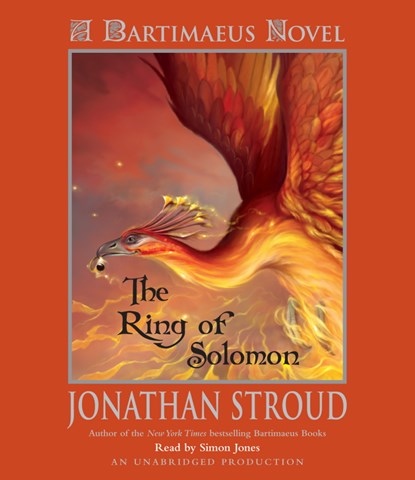 THE RING OF SOLOMON

Listeners were first introduced to Bartimaeus, the wisecracking djinni, in THE AMULET OF SAMARKAND. In this prequel, set in ancient Israel, the cynical and outspoken Bartimaeus is forced into servitude to King Solomon. The king has risen to greatness due to the power of a magical ring. After the Queen of Sheba rejects Solomon’s proposal of marriage, Bartimaeus teams up with Ashmira, the loyal captain of Sheba’s guards, to defeat Solomon before he destroys her kingdom. Narrator Simon Jones gives distinct voices to the multitude of characters, each with a unique tone and attitude. Bartimaeus, with his posh British accent, is both lovable and egotistical. Jones’s sense of timing for both humor and intrigue contributes to a spirited performance. L.A.C. © AudioFile 2010, Portland, Maine [Published: DECEMBER 2010]