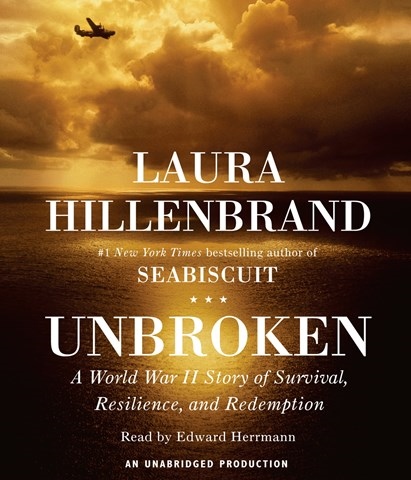 Both author Laura Hillenbrand and narrator Edward Herrmann share the muse for biography. Hillenbrand (SEABISCUIT) captures the particulars of a captured WWII bomber pilot’s travails of surviving torture and deprivation beyond our abilities to imagine. Keeping in the background, Herrmann avoids upstaging this intimate memoir, loaded with enticing psychological detail. He modulates his voice to communicate emotion, reading the many moments of sadness with respect. Without resorting to the annoying convention of pauses before quotes or conjuring up comedic characters, he conveys multiple personalities and their quotations with subliminal ease. The writer and narrator integrate their talents to bring the life of Louie Zamperini—a juvenile delinquent, Olympic athlete, and decorated combat hero—into suspenseful reality. To the end, they keep the story engrossing. J.A.H. Winner of AudioFile Earphones Award, 2012 Audies Finalist © AudioFile 2010, Portland, Maine [Published: DECEMBER 2010]