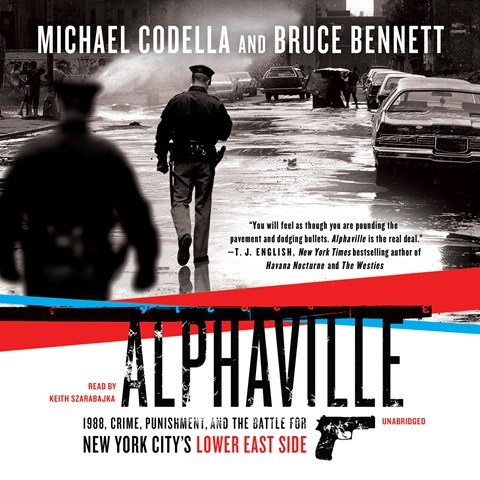 ALPHAVILLE 1988, Crime, Punishment, and the Battle for New York City's Lower East Side

As a cop, Codella worked the toughest beat in New York City, a part of lower Manhattan called Alphabet City. He had grown up close by in Brooklyn, where cops and Mafia heads lived on the same block, and knew the streets like a native. He soon found that speaking the language of prostitutes and dope-dealers gave him an advantage in fighting against the drug wars taking place in a crime-infested city. Narrator Keith Szarabajka provides Codella’s story with streetwise New York accents and Puerto Rican-accented English. In delivering the story’s noir style, he excels at depicting the gang members, drug dealers, and other low-lifes the author specialized in putting out of business. Without Szarabajka’s narration, one imagines that the trip into the danger and occasional comedy of such a terrible place would be far less entertaining. Codella doesn’t paints himself as an angel—nor does he talk like one—but he seems like he wears a badge you’d want in your neighborhood. J.A.H. © AudioFile 2011, Portland, Maine [Published: FEBRUARY 2011]