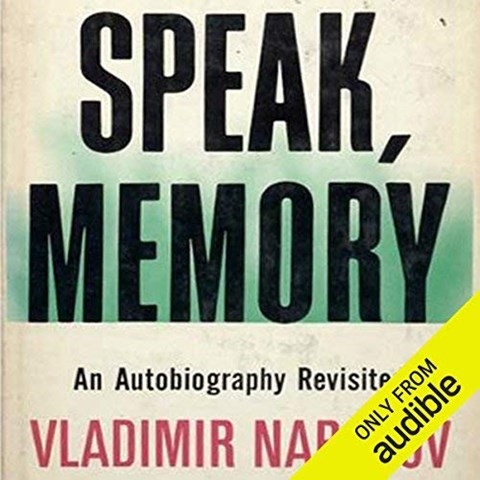 At first, Stefan Rudnicki’s gravelly masculinity sounds too gruff for Nabokov’s lithesome prose, and too weighty for the sinuous architecture of this seemingly meandering memoir. But like the path of those butterflies Nabokov so extols, the narrative line is artfully focused and intricately coded, and over the course of its chapters Rudnicki proves his command of this most cosmopolitan and connotative of writers, in each of his several languages. Rudnicki’s steady, unstrained delivery works both as complement and counterbalance to elements that might seem gossamer or arcane in a lighter voice. More important, he gives Nabokov’s text its value in precision of enunciation and syntax, the base elements from which Nabokov weaves his magic. And most important of all, he makes Nabokov, who often seems unapproachable, a persona in voice that is a bit stiff and pedantic, but charming and amiable, too. Beguiling and superbly produced, this bittersweet rendition will appeal to lovers of Nabokov and those experiencing their first taste. D.A.W. Winner of AudioFile Earphones Award © AudioFile 2011, Portland, Maine [Published: JANUARY 2011]