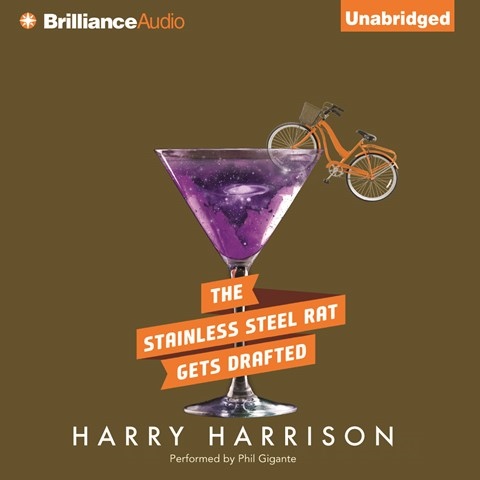 THE STAINLESS STEEL RAT GETS DRAFTED

The story takes place before slippery Jim DiGriz saved the world, traveled time, and joined the circus. Here he's a terrified novice thief just out of prison and eager to make his mark on an unsuspecting universe. First, though, he needs to go to war. Phil Gigante revels in the numerous over-the-top characters who require him to wheeze, spit, whine, stammer, and grovel. For the young Jim, Gigante adopts a slight hesitancy, that of an optimist thrust into a brutal world. When Jim gains confidence, Gigante’s voice deepens and rises in volume. Gigante has the most fun with several villains and military personnel, for whom he applies broad accents and general shouting as the situation requires. Minor characters are distinct, with individual vocal tics. A.Z.W. © AudioFile 2011, Portland, Maine [Published: MAY 2011]