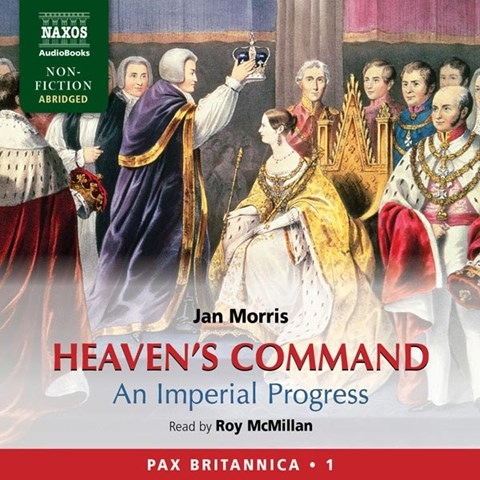 Jan Morris acknowledges that this opening volume of her Pax Britannica Trilogy, a history of Britain’s empire building from the reign of Queen Victoria to the death of Winston Churchill, is at first too positive in its attitude toward the colonizers. As listeners hear the first section, full of heroic battles read in an excited voice by Roy McMillan, they might agree. However, Morris doesn't avoid British atrocities like the "Devil's Wind" reprisals for an uprising in India or the murderous violence toward native Tasmanians. McMillan's reading of this volume captures the energy of battle and the optimism that Britons in the Victorian Age felt toward their expansion and technological feats. McMillan’s reading is well done; however, for additional perspective, listeners may also want to read a history of the empire in the twentieth century, perhaps Morris’s final volume, FAREWELL THE TRUMPETS (coming on audio this spring). J.A.S. © AudioFile 2011, Portland, Maine [Published: SEPTEMBER 2011]