Home»Reviews»THE LADY IN THE LAKE 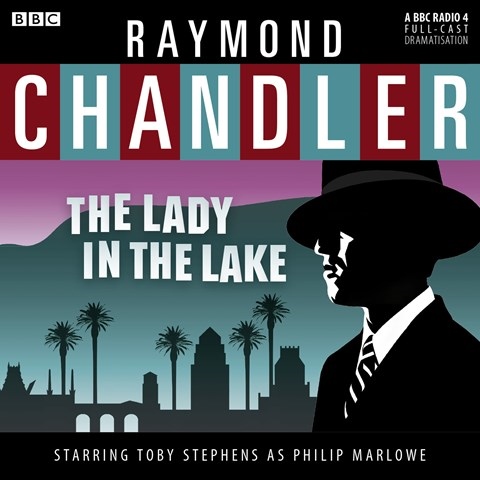 THE LADY IN THE LAKE A BBC Full-Cast Radio Drama

by Raymond Chandler | Read by Toby Stephens and a Full Cast

This Raymond Chandler noir is classic Chandler. Although rarely performed, except in the 1947 MGM film, it still chills decades later as the quintessential shrewd private eye Philip Marlowe travels to Mexico and back and drives the hills of L.A. to a brisk mountain lake in search of a divorcée who just might be dead. Her philandering intended also poses a problem—having been murdered before the investigation begins. The BBC Radio 4 full cast dazzles with swift pacing and dramatic interactions enhanced by period music and sound effects. Actor Toby Stephens portrays the weary and cynical Marlowe in a style that bites off chunks of Chandler's iconic hard-boiled dialogue. The author's wry prose and fatalistic commentary never fail to beguile as the dark twists build to a climax. A.W. © AudioFile 2012, Portland, Maine [Published: JUNE 2012]