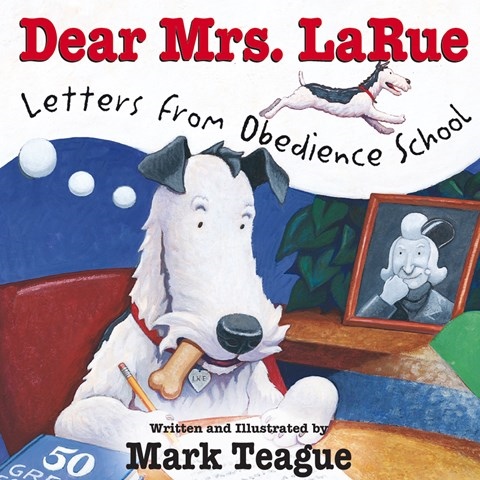 The “Snort City Register Gazette” keeps close tabs on the whereabouts of Ike, the recalcitrant dog of Mrs. Gertrude R. LaRue. When Ike is removed to the Igor Brotweiler Canine Academy for behavior management, he begins a letter-writing campaign to persuade his owner to shorten his two-month (longer in dog years) stay. David de Vries’s narration catches the humor in the situation. His fluctuating falsetto underscores Mrs. LaRue’s list of complaints, which include howling at the neighbors’ cats and stealing food off the counter. (“I’m at my wit’s end!”) As Ike, he uses a myriad of vocal styles—wheedling, charmingly proper, and pointedly exasperated, for example, in a histrionic display to convince Mrs. LaRue that Ike has always had the best of intentions. A.R. © AudioFile 2011, Portland, Maine [Published: AUGUST 2011]