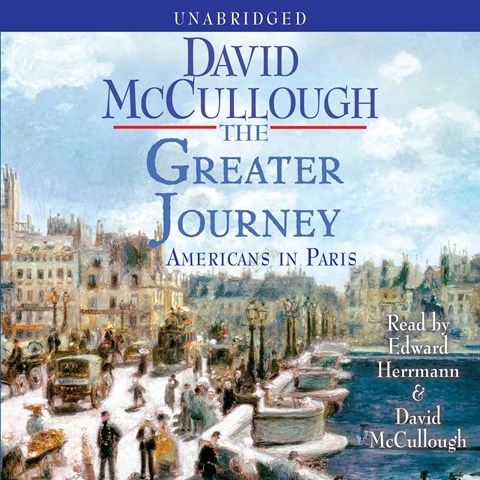 THE GREATER JOURNEY Americans in Paris

This splendid production of McCullough’s history of Americans in Paris in the 1800s gives the royal treatment to one of our nation’s most esteemed historians—and most identifiable voices. McCullough delivers only the introductory chapter here. But Edward Herrmann’s sterling voice is compatible with McCullough’s familiar syntax and manner of inflection, and conveys the distinctive character and mood of his prose. The text itself is prismatic, moving through a cast of representative figures that include novelists, painters, and physicians—many well known, many obscure. Herrmann trusts the text explicitly, delivering it without flair or affect, with a fluent command of the French names and sites. This is popular history at its best and is certain to become one of this year’s most prestigious audio releases. D.A.W. Winner of AudioFile Earphones Award © AudioFile 2011, Portland, Maine [Published: JUNE 2011]