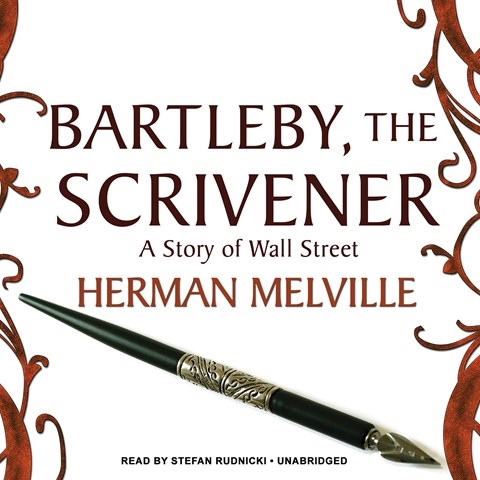 BARTLEBY, THE SCRIVENER A Story of Wall Street

As Melville’s second-best-known story, “Bartleby, the Scrivener” is familiar to almost anyone who has taken American Lit. What is little recognized, however, is its subtitle: “A Story of Wall Street.” This subtitle, accompanied by Bartleby’s passive resistance in “occupying” (though the story does not actually use this word) the lawyer’s office, makes this tale strangely relevant to contemporary listeners. Stefan Rudnicki’s stately baritone embodies the story’s narrator, the stuffed-shirt Wall Street lawyer whose perplexed reaction to Bartleby is the substance of the story. The diction of the nineteenth-century lawyer is a little terse and archaic, but Rudnicki’s performance gives it fresh character. And it’s a treat to hear him adroitly deliver Bartleby’s meek, yet steadfast, iconic phrase: “I prefer not to.” F.T. © AudioFile 2012, Portland, Maine [Published: MARCH 2012]