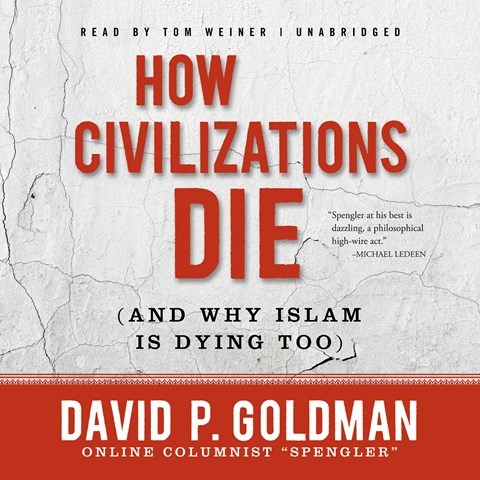 HOW CIVILIZATIONS DIE And Why Islam Is Dying Too

The rabble-rousing online author who writes a column called “Spengler” (ASIA TIMES ONLINE) rivets attention with his discussion on the relationship between population decline and the likelihood probability of increased extremist aggression. The gravitas in narrator Tom Weiner’s resonant voice never lets up, piling seriousness onto already heavy reading. Most people are aware that birthrates are declining in the West, but few know that the trend is also occurring in the Middle East—a part of the world that does not have the resources to support an aging population. According to Goldman, radical Muslim terrorists are poised to exploit the coming crisis. Weiner’s understanding of the author’s argument is seamless, and he delivers an authentic and sobering learning experience. For a memorable perspective on some important challenges facing Eastern and Western civilizations, these rich insights will shift or deepen the world affairs paradigms offered by the mainstream media. T.W. © AudioFile 2011, Portland, Maine [Published: NOVEMBER 2011]