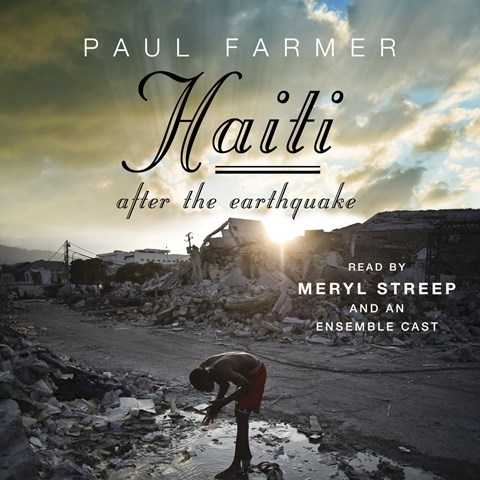 HAITI AFTER THE EARTHQUAKE

Listeners can immediately believe they are hearing Paul Farmer himself deliver his eloquent broadcast of the voices of those affected by the disastrous earthquake in Haiti in January 2010. Eric Conger captures not only the matter-of-fact tone of Dr. Farmer, founder of Partners in Health and UN deputy special envoy for Haiti, but also the bold yet restrained compassion that fills Farmer's account. Additional essays by friends and colleagues make up the second part of the program. Edwidge Danticat and Michele Montas-Dominique deliver passionate readings of their works. Joia S. Mukerjee’s heavily accented delivery of “Neg Mawon” resonates with anger on behalf of her country. Meryl Streep and Edoardo Ballerini give commanding and sensitive performances of several essays. The careful, respectful use of Haitian Creole is a welcome addition, as are clear introductions and an index to the essays. The scenes of unimaginable devastation and loss so vividly described can be hard listening, but Farmer's vision for "building back better" and the hope and commitment of his colleagues and friends remain indelible. S.J.H./R.F.W. Winner of AudioFile Earphones Award © AudioFile 2011, Portland, Maine [Published: AUGUST 2011]