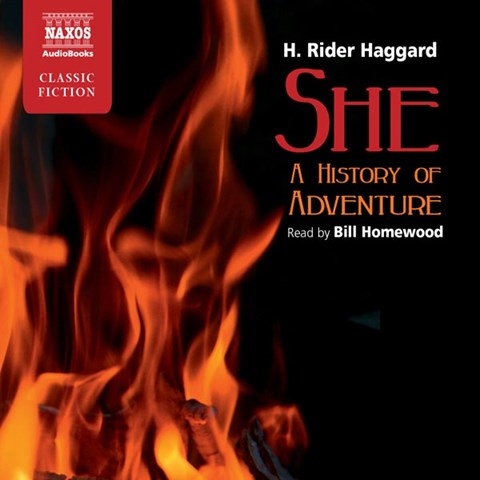 SHE A History of Adventure

This imaginative classic from the late 1800s is expertly read by Bill Homewood. The story is a first-person narrative that follows the journey of Horace Holly, a Cambridge University professor, and his ward, Leo Vincey, to a lost kingdom in central Africa. After a shipwreck, they encounter a primitive people called the Amahagger in the lost kingdom of Kor and a mysterious white sorceress who reigns as the all-powerful "She-who-must-be-obeyed." Homewood exquisitely captures the wonders and horrors encountered by these Victorian gentlemen on their adventures. His calm, well-paced reading adds a dimension of reality to a tale of natives, murder, and rage. Modulations of tone and inflection add to a performance that keeps listeners entranced. S.C.A. Winner of AudioFile Earphones Award © AudioFile 2011, Portland, Maine [Published: DECEMBER 2011]