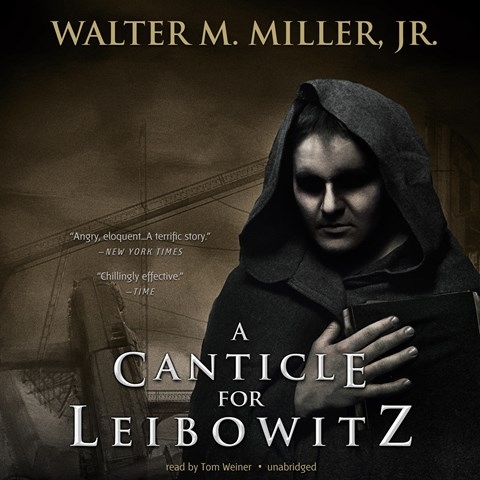 A CANTICLE FOR LEIBOWITZ

The conversion of a Jewish nuclear engineer leads to the founding of a Catholic monastery of the Order of Leibowitz. Tom Weiner follows the plot through three parts, beginning 600 years after a nuclear war and following full circle through anti-science dark ages, a new age of enlightenment 600 years later, and a new modern age 600 years after that. The newest age includes interstellar travel and another impending nuclear war. Weiner is particularly convincing as the young, naïve novitiate who discovers hidden scraps of documents from Liebowitz, which begin the rebirth of science. Weiner also skillfully handles the Latin of the Catholic Church of 1959, when the book was written. J.E.M. © AudioFile 2012, Portland, Maine [Published: MAY 2012]