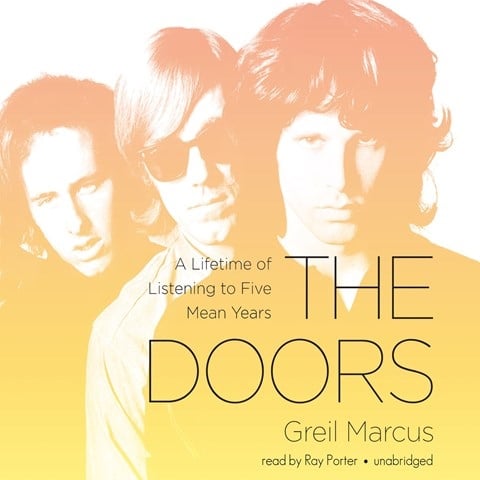 THE DOORS A Lifetime of Listening to Five Mean Years

Rock’s top scholar, Greil Marcus, is a free-association master who effortlessly draws parallels between the most arcane cultural manifestations and their populist underpinnings. Narrator Ray Porter astutely grasps Marcus’s snide qualities, delivering a performance resonant with a tone of righteous scorn—a trademark of the author’s writing since his days at ROLLING STONE and NEW WEST. It’s forceful material, and Porter embodies the weight of Marcus’s convictions perfectly. Given the author’s penchant for intellectualization, the Doors, with their heady brew of death visions and chaos theory, and their straddling of the cultural divide between the ‘60s and the contemporary world—not to mention singer Jim Morrison’s cult appeal—prove to be the perfect fodder for the author’s active imagination as well as Porter’s dramatic mastery. J.S.H. © AudioFile 2012, Portland, Maine [Published: JANUARY 2012]