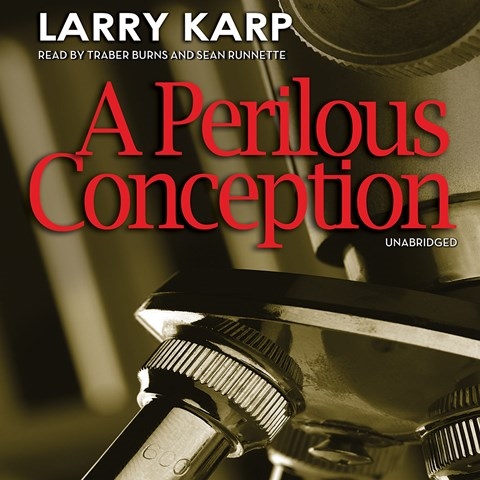 Detective Baumgartner finds himself with an unusual case: Dr. Colin Sanford recruited Dr. Giselle Hearn for a secret IVF collaboration that produced a healthy baby boy. But the controversial in-vitro fertilization was dwarfed by the news of Dr. Hearn’s murder by the birth mother’s schizophrenic husband, who also killed himself. Traber Burns and Sean Runnette’s polished performances richly characterize and contrast Sanford’s egotistical personality with Baumgartner’s hard-boiled persona as they alternate first-person points of view. Runnette’s delivery of Baumgartner’s crusty voice is especially believable. The portrayal of Baumgartner’s sidekick, Iggy, is laugh-out-loud funny when Iggy pours double-strength peroxide on Baumgartner’s fanny wound. This medical mystery is not to be missed. G.D.W. © AudioFile 2012, Portland, Maine [Published: MARCH 2012]