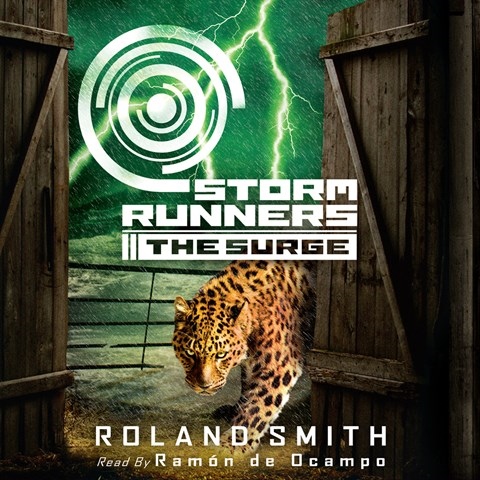 Packed with adrenaline, STORM RUNNERS stretches credulity to the brink. Book 2 opens in the middle of a hurricane. Narrator Ramon de Ocampo’s consistent and distinct characterizations help listeners get a bearing on the life-threatening situations and large cast of characters. His narration matches the intensity of the story. And by gearing the pacing down in quieter moments, he avoids exhausting the listener. The story jumps between parents who are stranded on one side of washed-out roads and their kids, who are on the other side. Nicole, Chase, and Rashawn shelter themselves on Nicole’s family’s farm, which houses exotic circus animals. The only adult supervision is that of Nicole’s grandmother, a psychic midget. An escaped lion, leopard, and bear stand between the kids and the gas they desperately need for the generator. A.M.P. © AudioFile 2011, Portland, Maine [Published: NOVEMBER 2011]