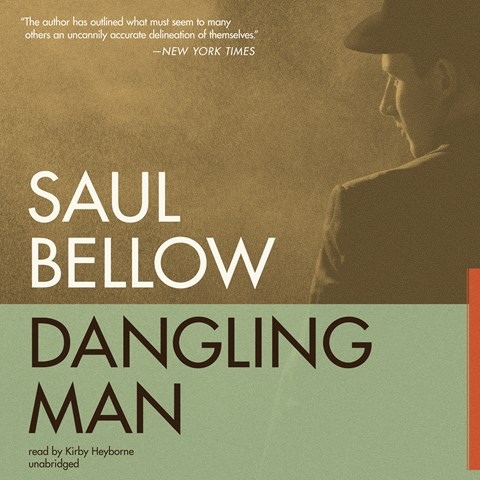 DANGLING MAN, first published in 1944, is the debut work of Pulitzer and Nobel Prize-winning author Saul Bellow. Set in the early 1940s, the novella is the diary of Joseph, a young man who is living in a boarding house and contemplating the Enlightenment while waiting to be called up for military duty. The story, replete with the type of thoughtful and insightful dialogue for which Bellow is known, is ideal for audio. Despite Bellow’s gifted writing, the narration by Kirby Heyborne is a bit uneven. At times, such as the moments when Joseph contemplates life’s most imponderable questions, Heyborne’s style is crisp. At other times, he seems lost, lapsing into a monotone that makes the book difficult to follow. Despite these moments, DANGLING MAN provides an opportunity to appreciate Bellow’s masterful writing and commentary. D.J.S. © AudioFile 2012, Portland, Maine [Published: APRIL 2012]