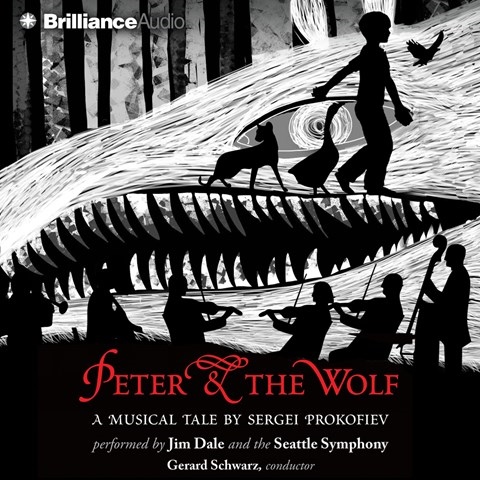 PETER AND THE WOLF

Many have tackled Prokofiev's PETER AND THE WOLF, but the sublime Jim Dale brings his own grace, wit, and English charm to this treat of a production. His pronunciation and articulation enhance the beautiful orchestral accompaniment. When Grandad proclaims that Peter is naughty and doesn't listen, there's no doubt in anyone's mind of his veracity! Because the musical score is so enchanting, it wouldn’t be surprising for the narrator to take back seat. But not so with Jim Dale as narrator! Learning, at the conclusion, that the duck in the wolf's belly isn’t dead is cause for rejoicing. This should be at the top of the list for schools and parents who wish to introduce classical music to a young audience. S.G.B. © AudioFile 2011, Portland, Maine [Published: OCTOBER 2011]