Home»Reviews»THE WARMTH OF OTHER SUNS 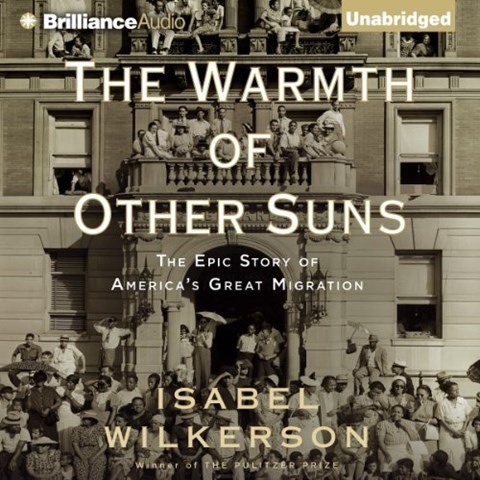 Pulitzer Prize-winning author Isabel Wilkerson’s extraordinary history of the twentieth-century migration of Southern black citizens to Northern and Western cities is narrated in standard American English by Robin Miles. But this is a book rich in dialogue. In the melted-butter drawls of rural Southern sharecroppers and in the crisp accents of Northern factory workers, Miles captures the voices of Black America. Through them, she gives voice to the plight of black Americans who found the courage and opportunity to flee Jim Crow laws in the South and embark on an almost invisible migration that changed the face of a country forever. Wilkerson’s highly acclaimed book is hard to put down, and Miles’s interpretation makes it almost impossible. S.K.G. Winner of AudioFile Earphones Award © AudioFile 2012, Portland, Maine [Published: JANUARY 2012]