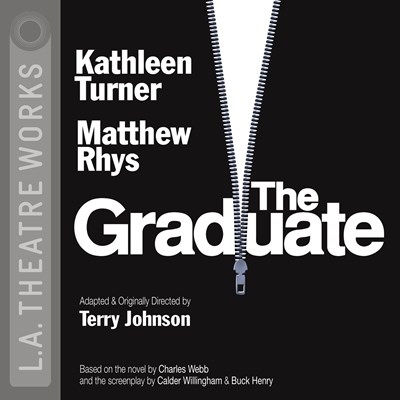 It's impossible to listen to the L.A. Theatre Works production of THE GRADUATE and not envision the 1967 movie starring Dustin Hoffman. And that's not a bad thing, especially when the audio version features the whiskey-voiced Kathleen Turner stepping into the role of the original cougar, Mrs. Robinson. If anyone can make listeners forget Anne Bancroft, it's Turner. With a nod to Hoffman, Matthew Rhys plays Benjamin Braddock, a young college graduate trying to find his way in the world. His path gets complicated when he has an affair with Mrs. Robinson and then falls in love with her daughter, played by Devon Sorvari. The actors make the performance come to life, a play for the theater of the mind. M.S. 2012 Audies Finalist © AudioFile 2012, Portland, Maine [Published: APRIL 2012]