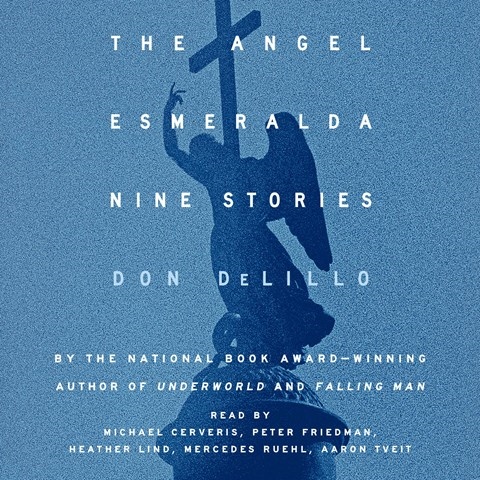 A medley of voices from five narrators generates a compelling presentation of DeLillo’s evocative short stories, written between 1979 and 2011. As a myriad of characters—such as nuns, astronauts, students, terrorists—delve beneath the surface of strangers’ lives, the narrators’ deliver satisfying tones of irony, inquiry, and discovery. In the title story, Mercedes Ruehl’s voice deftly shifts from strident youth to aged nun as sisters, street thugs, and neighbors confront a miracle on a billboard in the Bronx. Michael Cerveris draws listeners through the limbo of travel delays in “Creation” and into the future with “Human Moments in World War II.” Peter Friedman reads “The Starveling” and “Hammer and Sickle”; Heather Lind reads “The Ivory Acrobat” and “Baader-Meinhoff.” Aaron Tveit carries listeners through “The Runner” and “Midnight in Dostoevsky.” D.P.D. © AudioFile 2012, Portland, Maine [Published: JANUARY 2012]