Home»Reviews»ANNA AND THE KING OF SIAM 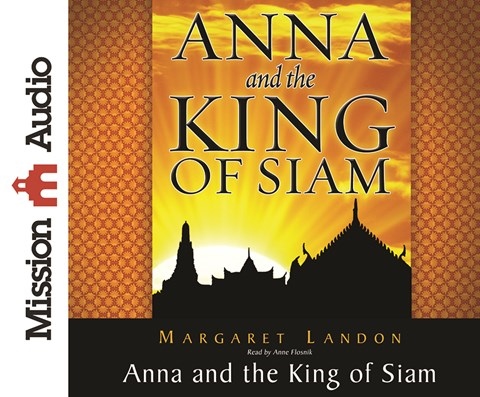 Enter the exotic world of Siam (Thailand) as seen through the words of Anna Leanowens, who teaches the children and wives of the King of Siam S.S.P.P. Maha Mongkut. Anne Flosnik narrates this charming story full of vignettes about the various characters in the harem, the palace, and nestled along the river in Bangkok. Flosnik flawlessly delivers the complicated Asian names. Switching seamlessly from narration to dialogue, she draws the listener into the story of Anna’s life, now immortalized in the play and movie THE KING AND I. Flosnik’s narration is magical and musical as her soft voice rises and falls with the varied emotions expressed by Anna as her amazing experience is depicted. Take a few hours to reacquaint yourself with this story of love, laughter, and life in a foreign land. M.B.K. Winner of AudioFile Earphones Award, 2013 Audies Finalist © AudioFile 2013, Portland, Maine [Published: MARCH 2013]