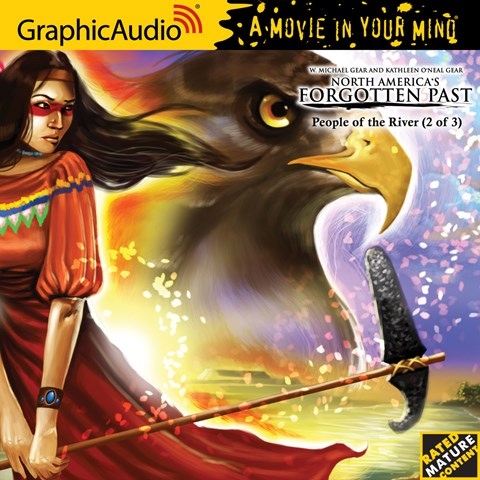 by Michael Gear, Kathleen Gear | Read by a Full Cast

[EDITOR'S NOTE: The following is a combined review of Volumes I, II, and III.] Listeners will travel back to a prehistoric time when Native Americans ruled North America from Cahokia, near Illinois today. In a time of drought, Warrior Woman and the Clan chiefs fight for the survival of their peoples. The narrator of this full cast reads with a hard, strong voice, enunciating words smoothly. Soft pipes and drums accentuate the action and add audio imagery to each scene. A full cast of voices delivers the parts of the characters, who include the crazy woman who hears the gods and Badger Tail, warrior of the people, as well as secondary characters such as cranky old men and bold young men learning warrior skills. As starving communities struggle to grow enough crops to pay tribute to Cahokia, and others fight against Cahokia's supremacy, a young woman dreams powerful dreams of the future of the people. M.B.K. © AudioFile 2012, Portland, Maine [Published: AUGUST 2012]