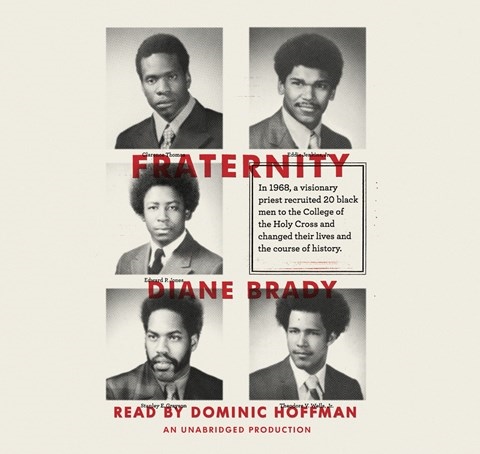 FRATERNITY In 1968, a visionary priest recruited 20 black men to the College of the Holy Cross and changed their lives and the course of history.

After Martin Luther King, Jr.’s, assassination, Father John Brooks of Holy Cross College in Worcester, Massachusetts, recruited a number of black students, many of whom went on to distinguished careers, including Clarence Thomas. THE FRATERNITY tells their story, giving a partial social history of the time. Dominic Hoffman’s slightly hoarse-sounding voice is likable, and his pacing is just right. He takes a thoughtful, sympathetic tone that brings out the feel of the text. Some misplaced emphasis on words or in sentences gives an occasional halting feel. But overall, Hoffman narrates well, striking the right note of quiet satisfaction at a heartening story in which noble actions yield exceptional results. W.M. © AudioFile 2012, Portland, Maine [Published: APRIL 2012]