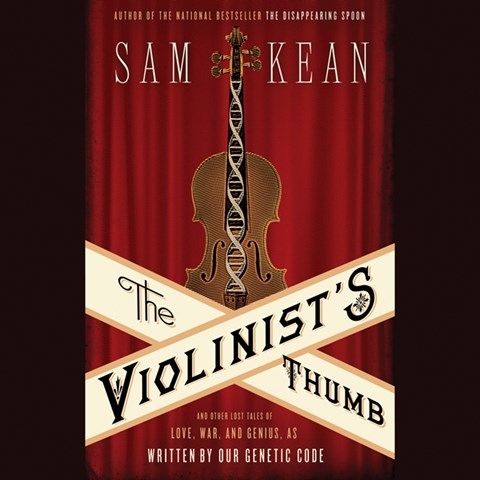 THE VIOLINIST'S THUMB And Other Lost Tales of Love, War, and Genius, as Written by Our Genetic Code

Beginning with a catchy title, this scientific exploration of the discovery of DNA explains a mind-boggling variety of genetic anomalies, extraordinary abilities, patterns, adaptations, and positive and negative mutations. Narrator Henry Leyva complements Kean's storytelling style, enabling the complex and esoteric science to be accessible and entertaining. Leyva unfolds the wonders of the building blocks of life with obvious fascination and incredulity as early scientists unlock one mystery after another. Never sounding boring or too complicated, Kean describes the tiny double-helix DNA strands and their huge implications for humanity with colorful imagery that is easily visualized. While listeners should be prepared for some technical intricacies, overall, the narration of this audiobook flows as the author recounts anecdotes about the engaging interactions, struggles, and conflicts among the scientists who defined genetic code. A.W. © AudioFile 2012, Portland, Maine [Published: AUGUST 2012]