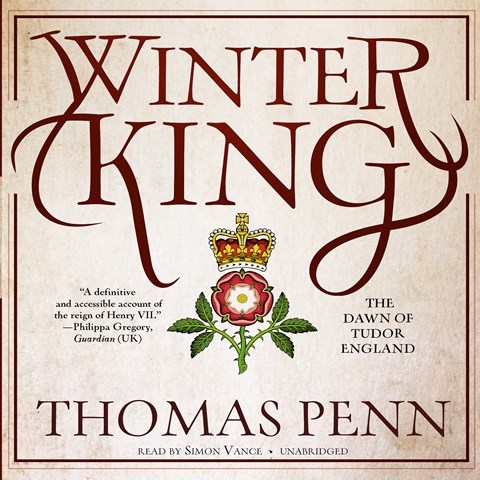 Listeners are in for a treat when they plug into this well-researched biography of Henry VII, the founder of the Tudor dynasty, who has been called the Uniter of England. Although Henry VII is often overshadowed by his much more famous descendants, his quarter-century on the throne was one of intrigue, drama, and political manipulation. Narrator Simon Vance's expressive reading is a perfect match for Penn's accessible and literary work. Especially helpful to listeners are Vance's subtle changes in tone to signal direct quotations and his expert handling of the Latin, Spanish, and other languages sprinkled throughout the text. Through careful use of pacing and emphasis, Vance holds listeners' attention throughout this fascinating true story of England's transition to power and wealth. C.B.L. © AudioFile 2012, Portland, Maine [Published: APRIL 2012]