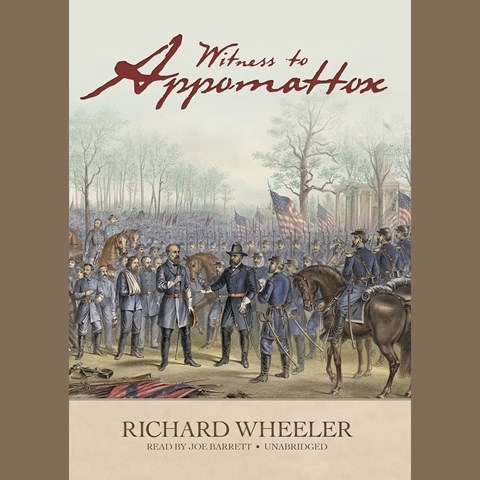 Wheeler’s account of the final campaign of the Civil War, which took place in Virginia, is movingly read by Joe Barrett in this companion volume to WITNESS TO GETTYSBURG. The author gives excellent background information before presenting a patchwork of reminiscences on the final months of the Siege of Petersburg/Richmond, their capture, and the pursuit of Robert E. Lee’s retreating Army of Northern Virginia by the Union’s Army of the Potomac and Army of the James, under the overall command of Ulysses S. Grant. Barrett has a deep, somewhat gravelly voice that adroitly presents the listener with credible Southern, Northern, and even French voices. The narrative portions are given the same professional treatment. The result is an overall clear and disciplined reading. M.T.F. © AudioFile 2012, Portland, Maine [Published: APRIL 2012]