Home»Reviews»MAY THE ROAD RISE UP TO MEET YOU 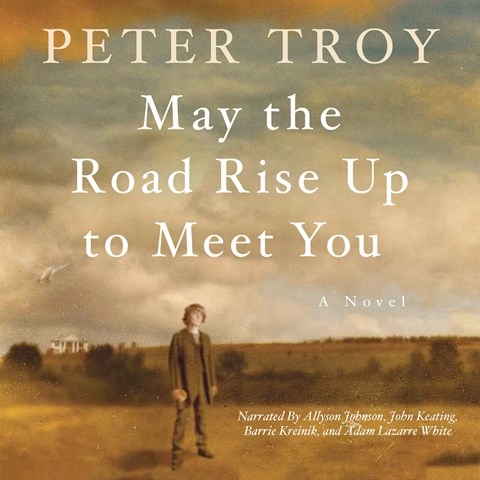 MAY THE ROAD RISE UP TO MEET YOU

The years leading to the American Civil War were turbulent, particularly for immigrants and African-Americans, both victims of their circumstances who had varying abilities to rise above them. Peter Troy follows the lives of two European immigrants—Ethan, from Ireland, and Marcella, from Spain—and two slaves—Mary and Micah—from the years just before the Civil War through the assassination of Lincoln. The four characters, who each tell parts of the story from their own point of view, are performed by four narrators: John Keating, Barrie Kreinik, Allyson Johnson, and Adam Lazarre White, respectively. All four narrators meld seamlessly into their characters and provide stellar performances, providing the listener an engrossing listening experience. Particularly impressive is the ability of all four narrators to mimic the accents and voices of other characters when they interact. There is never an issue with a character sounding completely different when appearing in a section told from a different character’s point of view. This continuity between sections unifies a group of strong individual performances and makes them into a wonderful and cohesive audiobook. J.L.K. Winner of AudioFile Earphones Award © AudioFile 2012, Portland, Maine [Published: MAY 2012]