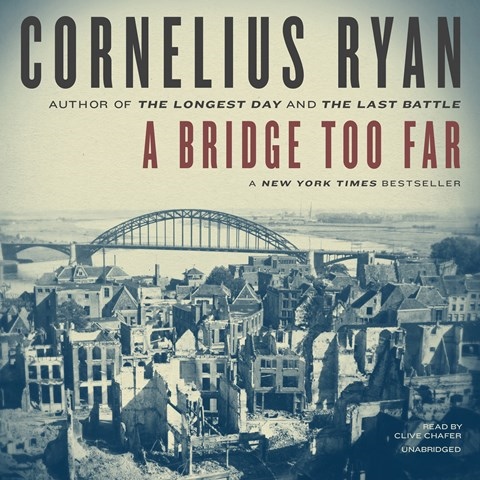 A BRIDGE TOO FAR

Originally published in 1974, this classic work of military history details the Battle of Arnhem in the Netherlands, a major Allied attack meant to end WWII in 1944. It’s a great book and deserves wide readership among the new generation. Narrator Clive Chafer has an elegant, silky smooth English accent that makes the book sound as if it’s straight out of the “World at War” series from the BBC. Chafer does a creditable job reading the military details, and his crystal clear diction makes the work understandable. The problem is that he doesn’t raise his effort much past basic reading aloud. His delivery is monotonous, and great swaths of the book are slow and boring. It’s a shame, but his voice does have great promise for future narrations. R.I.G. © AudioFile 2012, Portland, Maine [Published: JULY 2012]