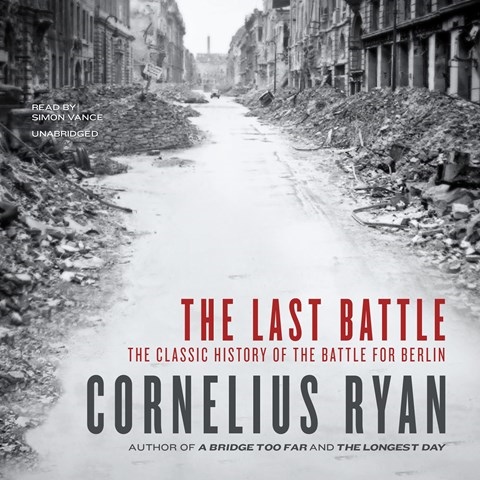 Simon Vance’s expert cadences make dense historical material interesting, and his performance of Cornelius Ryan’s account of the grisly 1945 battle for Berlin is no exception. Vance is the best of the several narrators who sound like BBC “news readers,” projecting respectful solemnity with an occasional verbal raised eyebrow to convey a moral judgment. Here, Vance’s plummy English accent has an unaccustomed hoarseness. One hopes this is a cold rather than the cumulative effect of soldiering through the narrations of so many military history tomes. As usual, Vance spices his performance by reading each quote in the appropriate foreign accent. Ryan’s text characteristically jumps from one eyewitness perspective to the next, and Vance’s effort to use pauses to convey these transitions can’t overcome the occasional confusion. Ryan himself is better at vivid descriptions and personal accounts than at big-picture context: A better historical introduction to the subject is Anthony Beevor’s BERLIN: THE DOWNFALL 1945, or, for entertainment, David L. Robbins’s novel THE LAST BATTLE. D.S.S. © AudioFile 2012, Portland, Maine [Published: AUGUST 2012]