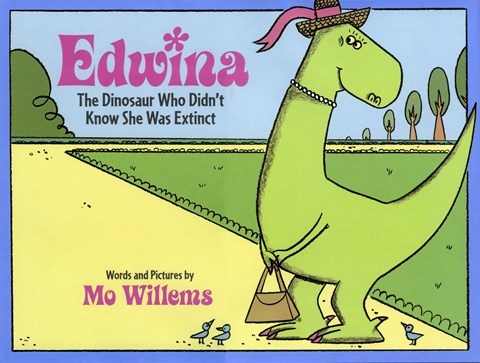 EDWINA The Dinosaur Who Didn't Know She Was Extinct

It’s a known fact that dinosaurs are extinct. But Reginald Von Hoobie-Doobie isn’t convinced. What abut Edwina, who lives in the neighborhood and bakes chocolate chip cookies? Cher Willems’s narration is packed with delight. She delivers punch to the characters’ names and understatement to the story’s absurdities, especially that of a dinosaur who loves to play with kids. Listeners can hear the smile in her voice. Willems’s use of extended pauses in the narration coupled with corresponding pauses in the jaunty background music heightens the suspense of each confrontation between boy and beast. A.R. © AudioFile 2012, Portland, Maine [Published: SEPTEMBER 2012]