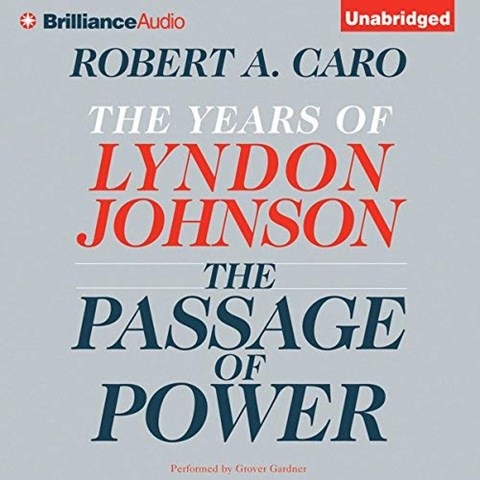 THE PASSAGE OF POWER The Years of Lyndon Johnson

by Robert A. Caro | Read by Grover Gardner

In an era in which people don’t read to the bottom of a blog post, it’s refreshing to revel in the detailed fourth volume of Robert Caro's extraordinary biographical project. This volume covers that brief time (1958 to early 1964) when the paths of two extraordinary American politicians—Johnson and John F. Kennedy—crossed. It begins with Johnson's thoughts about running for president and ends a few months after Kennedy's death. Grover Gardner, part Mike Wallace and part your favorite uncle, offers a perfectly consistent performance throughout the 32 hours of this audiobook. Gardner conveys Johnson's agony in the despised exile of his vice presidency, his occasional corruption, and his extraordinary capacity for exercising power in pressing for the Civil Rights Act. In his warm, avuncular baritone, Gardner makes an enigmatic man almost comprehensible. F.C. © AudioFile 2012, Portland, Maine [Published: MAY 2012]