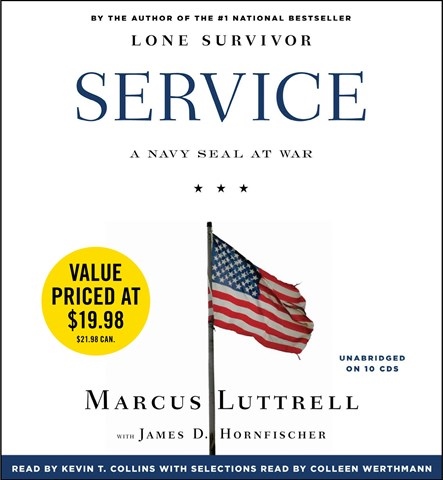 SERVICE A Navy SEAL at War

Marcus Luttrell served, and gave parts of his body and soul to, the U.S. Navy as a member of SEAL Team 5 in Afghanistan and Iraq. This book recounts his awakening as a soldier, a freedom fighter, and someone willing to give his life for his country. Kevin T. Collins is the main narrator, and Colleen Werthmann delivers selections from letters at the end of the book. Collins reads with a breathy, urgent tone meant to convey both the gallantry and weariness of someone who's served in dangerous combat operations. He has a slight Southern accent and urges the story forward with clear diction and a down-home tone. Werthmann also has a slight Southern accent, and she reads the letters home with feeling. R.I.G. © AudioFile 2012, Portland, Maine [Published: AUGUST 2012]