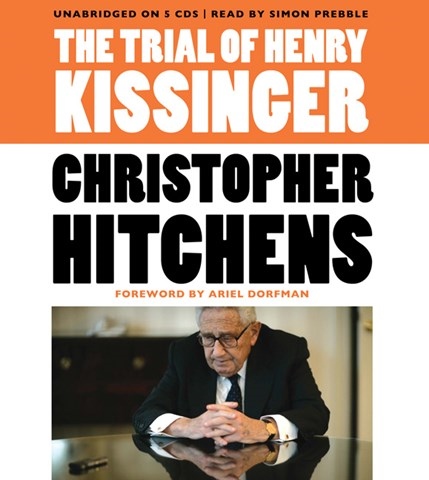 THE TRIAL OF HENRY KISSINGER

Hitchens makes the case, with a sometimes exhaustive detailing of complex events, that former Secretary of State Henry Kissinger is a war criminal deserving of punishment, even capital punishment. Simon Prebble’s deep voice and British accent make him a good match for the authorial persona of Hitchens. His gravely serious tone fits the material, while he also conveys, without exaggeration, the author’s scorn and disgust for Kissinger. He alters his voice slightly to indicate quotations without trying to imitate the person quoted, a tack that works without being distracting. At times, however, even his energy, expressiveness, and clarity can’t make it easy to follow the myriad details of names and dates and events. But this prosecutorial case deserves a hearing, and Prebble delivers it with as much flair as possible while staying true to its intent. W.M. © AudioFile 2012, Portland, Maine [Published: AUGUST 2012]